There were many ways to go about it....
Tee shirt, duct tape, paper mache.....
I chose trash bag and masking tape.
I purchased two different sizes of tape and got to work.
﻿
I cut a small V in the center of the bag, put it on my form
and started taping the neck area first.
Next was under the bust, then the X from front to back
and then the waist.
I was careful in smoothing the bag over the form's contours and
switched back and forth between the two sizes of tape when needed.
﻿
My goal was to put on as much tape as possible.
It took me four hours to tape her!!!!
If you look at the first photo you see she's on a tripod type base,
no place to step for holding her in place while taping.
She and I "danced" around my craft area most of the afternoon. 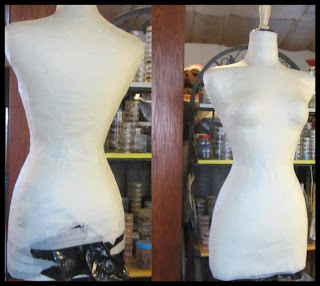 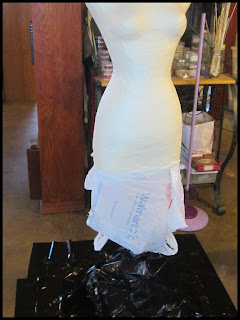 Protecting stand and floor
After I finished taping her, I taped some bags at the "hem" to protect
the base from the messy glue job that was sure to follow.
I wasn't sure what I was going to use next.
Paper? Muslin?
How about a cuppa while I think about it?
Then I remembered I had this bolt of cheesecloth.
A freebee from my old job, YES!

It's settled then, cheesecloth it is! 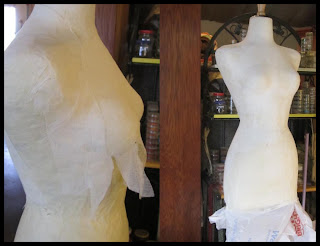 I started out by cutting large pieces from the bolt of cheesecloth,
and then cutting those into smaller pieces.
Using a paint brush, and starting at the neck,
I applied a bit of glue to the form, laid the cheesecloth on top of the glue,
then painted on a little more glue.
This approach seemed easier, less messy,
than soaking the cheesecloth in the glue.

I just glued, draped, and trimmed my way around,
util I reached the bottom edge.
I gave her one more layer of cheesecloth, top to bottom,
then set her in front of the fan to dry over night.

I felt like a crazy doctor, putting a full body cast on a patient!

Today, she gets more cheesecloth, and I shall ponder,
how to stuff her and how to attach a stand.
There's a few ideas rolling around inside my head,
we'll see.
Stay tuned for part two.
Till next time,
Bonjour
﻿

Posted by Unknown at 10:31 AM
Email ThisBlogThis!Share to TwitterShare to FacebookShare to Pinterest

Terry,
That is a wonderful idea!! I wish I would have thought of that in college. Luckily there was small dress form that I was able to check out from my university but it would have been great to have a standard one at the time.